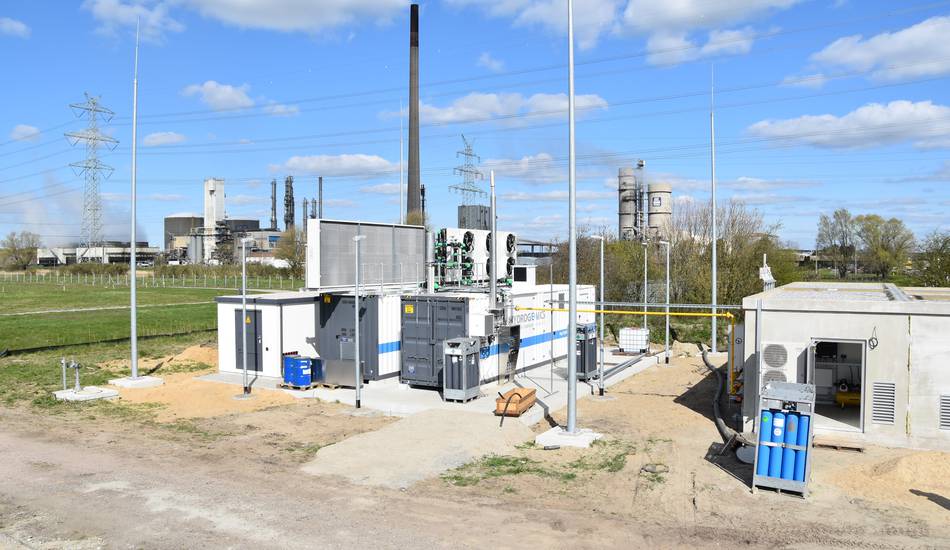 Wind to gas energy holds opportunities for mobility in future

The windswept region north of the Hamburg Metropolitan Region is ideal for wind turbines. However, most of Germany’s wind energy plants are near Dithmarschen in Schleswig-Holstein, but are prone to shutdowns as more electricity is produced than can be fed into the grid. Thus huge amounts of wind energy” go unused. Wind to Gas Energy GmbH & Co. KG, based in Brunsbüttel, has set itself the goal of creating *new value chains for renewable energies. Hans-Reimer Thießen, who manages Wind to Gas Energy GmbH & Co. KG with Tim Brandt, pointed out: “A successful energy transition requires more than just expanding renewables. We are calling for a holistic view of the energy sector and especially mobility.”

Wind to Gas Energy GmbH & Co. KG has built an electrolysis plant in Brunsbüttel to produce hydrogen using electricity from wind turbines. Basically, the plant splits water into oxygen and hydrogen, which is then fed into the regional grid. A new environment-friendly gas tariff called “Schleusen Wind Gas (literally lock-wind gas) is being introduced in co-operation with Stadtwerke Brunsbüttel. And a hydrogen filling station for cars has also been built on the site there.

Co-operating with car manufacturers and authorised dealers such as Hyundai is an important part of Wind to Gas Energy GmbH & Co. KG’s concept. The company owns two models of the Hyundai Nexo hydrogen car. Customers can test drive the vehicle, which has a range of up to 756 kilometres and the company advises them about all aspects of “New Mobility”. “We broker leasing contracts and offer advice about the latest subsidies through our co-operation,” said Alexandra Werner, Marketing Director at Wind to Gas GmbH & Co. KG. The company has already brokered several vehicles and their owners can use the filling station in Brunsbüttel in future. Germany already has 74 filling stations of this kind.

Wind to Gas Energy GmbH & Co. KG is already co-operating with Stadtwerke Brunsbüttel. This “green alliance” aims to drive ahead the energy transition by making better use of renewable energies. The programme also lends support to companies and people interested in alternative mobility concepts. The alliance helps companies convert entire fleets of vehicle fleets to run on electricity and hydrogen. More than 60 vehicles have been brokered across the region in this way. The project by Wind to Gas Energy GmbH & Co. KG and Stadtwerke Brunsbüttel is part of the NEW 4.0 – North German Energy Transition 4.0 in Hamburg and Schleswig-Holstein. To this end, an alliance of industry, science and politics has formed in Hamburg to achieve a sustainable supply of energy and to boost the region’s viability in future.
at/sb/pb